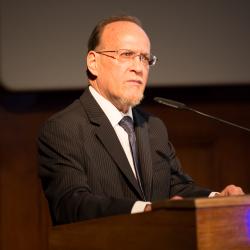 Mark Schankerman is Professor in Economics at the London School of Economics, Research Associate at the Centre for Economic Performance, and Research Fellow at the CEPR. He has a PhD in Economics from Harvard University, formerly taught at New York University, and was Research Associate at the NBER for ten years. He was Director of Policy Research and Advisor to the Chief Economist at the EBRD from 1995-2003, has worked at the World Bank on Africa, and has extensive consultancy experience in the private and public sectors.

He is widely published in scientific journals on patents, innovation, university technology transfer, productivity, open source software, and emerging economies. He serves on the Advisory Board of the Journal of Industrial Economics and was an editor of several journals. His book, The Comingled Code: Open Source and Economic Development (MIT Press, 2010, with Josh Lerner) was reviewed in The Economist (13 January 2011). In 2010-11 he was on the Panel of Experts for HMG Hargreaves Review of Intellectual Property and Growth.